For the past few years, I’ve occasionally had this feeling that someone in Hollywood must be watching over me, or at least listening in on the strange ideas that go chunking through my head. The first I knew of this possibility was in early 2008, when I received word that there was to be a cartoon called Kung Fu Panda. At the time, I’d done quite a bit of research that would eventually form part of my book The Way of the Panda and was preparing to write and present a documentary called Panda Ambassador for BBC Radio 4.

Then, later that year, a big, red, London bus passed me bearing an advert that blurted out the next Hollywood cartoon offering: Space Chimps. When I looked it up online, this is what I found:

Ham III, the grandson of the first chimp astronaut, is blasted off into space by an opportunity-seeking senator. Soon, the fun-loving chimp has to get serious about the mission at hand: Rid a far-away planet of their nefarious leader. Fortunately for Ham III, two of his simian peers are along for the ride.

Still, I was prepared to put the geek aside and embrace this fictional descendent. Even if no grandson ever existed for real, the appearance of one in fiction was certainly a nice tribute to the great chimponaut himself. I’ve written a “Shortcuts” piece for The Guardian’s G2 about Ham to mark the 50th anniversary of his historic flight on board the Mercury-Redstone 2 spacecraft. 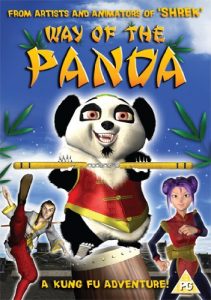 Finally, with my contract to write my panda book long-since sealed, with the writing well under way and the cover finalised, I learned of a DVD film called Way Of The Panda, which excusing the absence of the definite article appeared to have lifted my title of my book in its entirety. I bought a copy of the DVD immediately, for research you understand, only to discover that though Way Of The Panda claims to have come “from the artists and animators of Shrek”, it is appalling. The only good thing that can be said about it (apart from the title, of course) is that it is SO appalling that does have the power to make you laugh (especially, as my sons will tell you, if you are under the age of ten).

Whilst Kung Fu Panda was nominated an Oscar in 2009 (for Best Animated Feature Film of the Year), Space Chimps received no accolades whatsoever save an irrelevant nomination for its “Outstanding Achievement in Casting”. As you will find out if you buy G2 on Monday or tune back into this blog for a more thorough version of events, the real Ham – the chimp that actually flew into space – was cast in many different roles in life and death: as a chimp, as a research animal, as a heroic American astronaut, as a zoo animal, as a museum specimen, as a teaching tool. Quite incredibly, his bones themselves have even been cast. It’s a zonking story.

I’m still a little puzzled why nobody has done a Great Escape-style movie based on Lonesome George, the Galapagos tortoise who has been in captivity now for almost 40 years. But now I’ve said it, I’m sure it won’t be long before it’s in production.

Is Hollywood listening in on my brain?
Tagged on: cinema    film    Kung Fu Panda    media    space chimps    the way of the panda