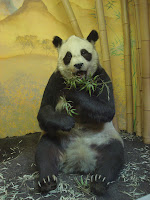 I spent yesterday at the wonderful library of the Natural History Museum in South Kensington, where I’d ordered up several interesting-looking folders from the archives. I’ve seen one of them before – a ream of correspondence relating to the taxidermy of Chi Chi, the famous panda that lived at London Zoo from 1958 until 1972. There are several fun things in there, including clear evidence of the public’s keenness to watch over the shoulder of the Museum’s taxidermist as he prepared her body for exhibition. The Museum had not anticipated this and decided to give the press a chance to see Chi Chi in mid-stuffing.

later when, in 1978, Guy the Gorilla died after more than 30 years at London Zoo. Word got out that he was to receive the same treatment as Chi Chi and the public was outraged. The archivists at the Natural History Museum have a wonderful folder on Guy that charts the whole troubled affair in a flurry of internal memos.

Best of all, there are letters from the public expressing their disgust at the proposed use of his mortal remains. Easily the best comes from a former Honorary Secretary of the Zoological Society of London. He was “utterly revolted” at the idea of stuffing his old friend and asked his incumbent: “Are all future Hon. Secs, Presidents etc. of the Society to be stuffed and exhibited in a museum?” The Zoo, irritated that they had to deal with such explosive stuff, wrote to express their disappointment at the Natural History Museum’s poor handling of such sensitive information (which is how it comes to be in the Guy dossier).

The Museum’s handling of Chi Chi and Guy are two wonderful stories that I’m planning to tell briefly in my chapter on Chi Chi’s post-mortem that will appear in Political Animal. I’m also working it up in more detail for an exciting meeting that will take place at Manchester University in December. I imagine I’ll reveal more about this nearer the time, but briefly it’s a project to explore the “Afterlife of Animals”, the fascinating tales that zoological specimens have to tell as curators made decisions about their preservation and presentation to the public. It says a lot about attitudes towards animals and how much these have changed.

At the moment, I’m uncertain what to make of the differences between public reaction to the stuffing of Chi Chi and Guy. I’d like to argue that as the 1970s unfolded something changed in the public’s attitudes towards animals and that come 1978 stuffing a famous animal was no longer acceptable practice as it had been in Chi Chi’s day. But of course, Chi Chi was a panda and Guy a gorilla and as anthropomorphised as Chi Chi (and pandas in general) undoubtedly are, Guy (and gorillas) are that much more like us Homo sapiens so stuffing is a more touchy subject. I need to think about what the reaction would have been like had roles been reversed and Guy died in 1972 and Chi Chi in 1978.