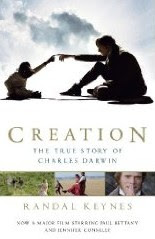 For a moment there, it looked like the all-mighty Christian fundamentalist lobby in the United States would prevent the distribution of Creation, a new film about the life and work of Charles Darwin. Thankfully, I learn today from an article in The Hollywood Reporter, one bold independent distributor Newmarket Films is up for a challenge.

I had a sneak preview of Creation before it opened in UK cinemas today. A couple of weeks ago, I attended a special screening at the Science Museum hosted by Nature (a journal I am occasionally lucky enough to write for). It was an event thought up by Adam Rutherford (that most debonair and witty presenter of BBC4’s recent three-part series The Cell). He ushered on John Amiel as “the director of Creation” to tell us about his movie.

Amiel sensibly took the opportunity to flag up several historical inaccuracies in the film that he knew could upset the packed house of Darwin fans (including the ever-present Sir David Attenborough). “There will be nay-sayers saying nay and nit-pickers picking nits. I’d love to say ‘Guys, it’s only a movie; get a life’,” he teased. “What we were struggling to bring to you was in a sense an imaginative truth instead of a factual and literal truth.”

I tried hard to “get a life” but I’ll confess that I struggled. I found myself disappointed that the location for most of the movie’s “action” was not the real Down House in Kent. The substitute, as pretty as it was, just didn’t seem right. I missed the presence of geologist Charles Lyell. I noticed things Darwin would not have said and did not write. And I know of no evidence that Darwin had such frequent and terrifying hallucinations that he came close to insanity. Because he does in the film.

Creation is an adaptation of Annie’s Box, a book by Darwin scholar (and descendent) Randal Keynes. John Murray (Darwin’s publisher) has just brought out a jazzed-up new edition to coincide with the movie. This places the death of Darwin’s eldest daughter Annie as a key moment in the naturalist’s loss of religious faith. Amiel’s “imaginative truth” also pushes the idea that Darwin worried his marriage to his cousin Emma Wedgewood might have had something to do with Annie’s death.

Darwin historians are starting to query this notion. I was in Leicester over the summer for the British Society for the History of Science’s annual meeting and there Kathryn C. Tabb of the University of Pittsburgh poured not inconsiderable amounts of cold water on it. I’m quoting from the abstract of her paper here:

“Darwin, aided by his cousin Francis Galton and his son George, applied the new statistical methods of the day to the quantification of consanguinity’s associated risks. I argue that Darwin’s views on cousin marriage were more sophisticated than those frequently ascribed to him in the literature. Whist incest evidently fascinated Darwin, his empirical work failed to demonstrate that a single generation of cousin-crossing was detrimental to the resulting offspring.”

But if, as Amiel recommends, I “get a life” for a moment, there was lots I did like about the film. Whoever was responsible for casting deserves a pat on the back. Real-life couple Paul Bettany and Jennifer Connelley make a super Charles and Emma and Martha West is a sparkling Annie. I’d also like to hear a Creationist reflecting on a mesmerizing time-lapse sequence of death and decay. That’s one helluva sick God. There are also lots of pigeons and I wrote an essay and presented a podcast for Nature earlier this year about the importance of these feathered friends to Darwin.

According to The Hollywood Reporter, Newmarket Films will be aiming for a December release. “While Darwin’s name has come to symbolize one side of a debate between the scientific and the theological, Creation depicts the man as the debate in total, with both sides contending, sometimes violently, within him,” says Chris Ball on Newmarket Film’s website. “In that sense, we believe that the film will appeal to people of faith and people of science.”

It’ll be interesting to see if he’s right.

US creationists to witness Creation