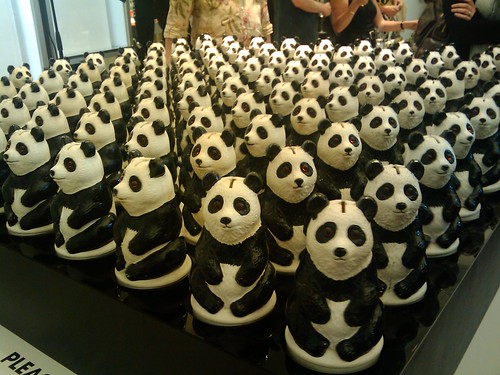 Some arty pandas are up for auction at Selfridges in London on Monday.

Just over a month ago, the famous Oxford Street department store opened an exhibition entitled Pandamonium at Selfridges on its ground floor. Pandamonium is such a well-worn play on words that I am determined to keep it out of my book Political Animal (except to point out how frequently editors and producers have been unimaginative enough to resort to it).

Thankfully, the panda-inspired artwork in the exhibition is really rather original. It’s all come about through a collaboration with the World Wildlife Fund-UK, who were scratching their heads over what to do with a whole load of decommissioned collecting boxes. Together with contemporary art curators and consultants Artwise, the conservation charity challenged 16 leading British artists to work some magic. They have turned the collecting boxes into collectors’ items.

The results – by the likes of Sir Peter Blake, Paul Smith, Tracy Emin and Rachel Whiteread – are rather nice. Just flipping through the online catalogue, I particularly like Smith’s “Cheerful Stripy Panda”, but am saddened to see it is already sold. I’d like to know who bought it and how much they stumped up to take it out of the auction? So frustrating, as I would surely have offered more.

This gives me an idea I might weave into my chapter on the origins and history of WWF. When did charities hit on the idea of fundraising auctions like this one? In its very early years, WWF certainly came up with some very innovative ways of loosening banknotes from the wallets of the public that were copied by other charities. The artwork auction is now a common and very successful fundraising tool. It certainly was last month at the Galapagos Conservation Trust’s Galapagos Day.

I’d like to go along to the Selfridges event, but with half-term looming I have to use every available hour to push on with my book. I had a good day on Friday, pretty-much wrapping up the opening chapter (on Armand David and the extraordinarily violence that beset China during the 19th century) and mapping out the second (on the niggling question of whether a panda is a bear).

The arty pandas will be on show Selfridges until 28 October.

Photo by The Style PA. Reproduced under the Creative Commons License.

From collecting box to collectors’ item