I sent an email to Eveline Dungl, a zoologist at Vienna Zoo who has been caring for the pandas there. I want to get an update on her experimental work on panda cognition, which is starting to reveal just how smart these animals are. 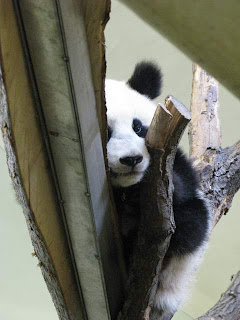 She is currently in China with Fu Long the 2-year-old male. She witnessed his birth in Vienna in 2007, the first panda born in a European Zoo by natural mating. I went to Vienna to interview Eveline and meet Fu Long for a BBC Radio 4 feature I wrote and presented earlier this year. I remember asking her how she’d feel if Fu Long were to be “recalled” to China. She admitted how sad she’d be – so how sad she probably is right now – but it was clear she could see the bigger picture. As wild pandas leave their parents after a couple of years, this branching out from his parents is probably quite important for his development.

She tells me, in reply to my email, that she’s coming back tomorrow. “Fu Long is doing fine,” she reports. “After some difficult days during the transport and arrival Fu Long is adapting to his new environment very well. He is still in the quarantine area but as soon as the quarantine period is over he will join a group of two-year-old pandas. He might enjoy playing with his new friends then.”