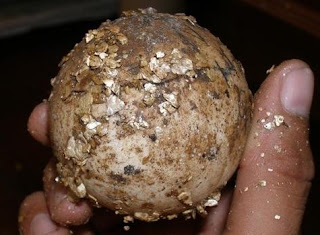 The Galapagos National Park has announced that a clutch of eggs laid in Lonesome George’s enclosure 120 days ago is not fertile. This photograph supplied by the Park is the rather unsightly and pretty convincing evidence.

George, you’ll remember, is the only surviving giant tortoise from Pinta, a small island in the north of the archipelago. The clutch of eggs in question had been laid by Female 107, one of two females that joined George from Isabela island in the early 1990s.

There is one other clutch still in the incubator, laid a little later by the other female. The signs are not good for these either. Wardens have already detected that they have lost weight, usually a sign of infertility. But of course, they are not saying for sure. There’s another press release – and more mileage in this latest George-related saga – yet to come.

Though it’s likely the other clutch is also going to be infertile, there will surely be another cycle of reproduction next year and more “George is going to be a dad”-type stories. When the time comes, I’ll be more than happy to write them…

On Galapagos matters, I’ve just been commissioning articles for the next issue of Galapagos News (which I edit). I am hoping there will be three main features, each taking one particular human-inhabited island as its focus: Isabela, San Cristobal and Floreana. It should make an interesting comparison.