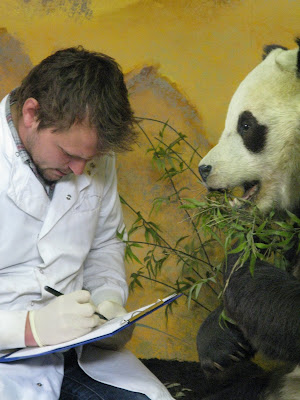 Pesenter Jimmy Doherty with labcoat, gloves and clipboard at the Natural History Museum last night to film a sequence for the forthcoming BBC documentary The Museum of Life. The first episode airs on 18 March on BBC2 at 8pm and Chi-Chi will make her appearance in the sixth and final episode on 22 April.

The effect of removing the panoramic glass panel to Chi-Chi’s case was really quite striking. Suddenly she became much more real. I was trying hard to contain my excitement, but I clearly failed because at one point, Doherty looked out of the case and caught sight of me hovering behind the cameras. “You can’t wait to get in can you?” he quipped.

One thought on “Panda makeover”