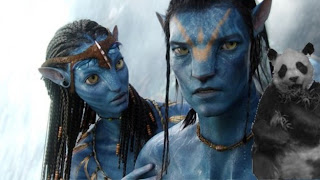 I was going to see Avatar tonight with all the 3D, IMAX-related frippery. But a panda has stopped me.

It’s Chi-Chi again, the famous 1960s panda that lived at London Zoo, hooked up with Moscow’s An-An and is now stuffed in the Natural History Museum in London. She’s been in the same glass case since her death in 1972 – so for the whole of my lifetime – and (like me) she is no longer the spectacle she once was. This is not down to the taxidermy, which is first-rate, but due to the fact that times have changed and the public appetite for hastily produced natural history dioramas is not what it once was. The museum staff are going to break into her case tonight for the first time in nearly 38 years.

The BBC will be there to film (for some big documentary about the museum) and it’s them (rather than the panda) that’s causing me to miss Avatar. Chi-Chi’s coming-out was supposed to have taken place last night but at the last moment the BBC announced it couldn’t make it so rescheduled for this evening. This is most annoying as the Avatar tickets have been booked for over a month – the earliest available – and I’ve had to let down my two best chums. But they were very understanding. “Dude, such a b&w panda-tastic moment is not for the missing,” emailed one this morning. “Enjoy the furry enormousness!”

I am indeed excited about this latest stage in Chi-Chi’s journey. It would be nice to think that my Radio 4 documentary last year focused the museum’s minds on the potential of this exhibit, but in reality I know that they’ve been wanting to bring new life to this important panda for a while. One suggestion is that they will take Chi-Chi’s skeleton (from the west side of the North Hall archway) and Chi-Chi’s skin (from the east side of the archway) and bring them together – or at least alongside one another – in the main hall in the shadow of the great model of Diplodocus carnegii. It would be very a radical Damien Hirst, out-of-body exhibit and, in my opinion, just what’s needed to force the public to engage with these kinds of exhibits more thoughtfully.

I intend to weave this latest development into a chapter I’ve written on Chi-Chi for the Afterlives of Animals project I’m contributing to. Note to self, I have to have this revised chapter in to the editor by the end of the month!

Photo courtesy of The Official Avatar Movie’s photostream on Flickr (with star appearance by Chi-Chi courtesy of China’s Global Icon or CGI).