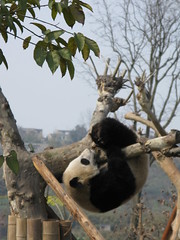 Well panda fans, that was good wasn’t it?

I’m talking of course about Panda Makers, the BBC2 Natural World documentary on pandas and the Chengdu Research Base of Giant Panda Breeding. I thought it was going to be solely focused on the captive effort and whilst this was where all the photo opportunities were, the hour-long documentary covered just about every important panda base there is. You can watch it again on BBC iPlayer.

There are some very funny bits, like when the sexually frustrated male Pin-Pin performs some kind of pole dance and though Sir David Attenborough makes a cheap gag at the expense of the panda’s “disproportionately short penis” and “startling deficiency” he quickly reigns in the frivolity: “It’s a myth that pandas aren’t interested in sex. They’re just picky about their partners.” 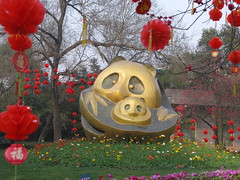 The documentary roams frequently out of the Base, up into the mountains to show some wild footage and there’s a delightful sequence of archival footage, including some film of Ruth Harkness and Su-Lin, some of which I hadn’t seen before. I thought the Mei-Lan side-story was a great touch, pulling the viewer away from the Base for a bit and following the Zoo Atlanta panda back to Chengdu. The branding of the aircraft reminded me very much of the way Chi-Chi received VIP (very important panda) treatment on her flight to Moscow in 1966. I did feel very sorry for Heather, the Zoo Atlanta keeper who raised Mei-Lan and then chaperoned her back to the Chengdu Base; that looked like a fraught physical and emotional journey and I’d like to interview her about it. The footage of Li-Li giving birth was amazing. Well done to film-maker Sorrel Downer, who spent two years shooting this documentary. You can listen again to a nice interview with her on BBC4’s Womans’ Hour last week.

I think I liked it so much because Sir David’s take on pandas was very close to mine. He celebrated the strides in Chinese science, the international collaboration but did not shy away from the commercial flip-side and the difficulties of reintroduction. Nevertheless, this kind of emblematic effort is stilll worth pursuing, he argued. “If we can’t protect the long-term survival of the giant panda…what chanced do we have of protecting those species that do not entertain us.”

I couldn’t have put it better.