ABC News ran a cheerful anthropomorphic Valentine’s Day story about panda pornography in which the reporter got an interview with Zhang Zhihe, director of the Chengdu Research Base of Giant Panda Breeding. The panda blog Pandas Live On has posted the broadcast version of the interview. I am lucky enough to have been granted a few minutes with Dr Zhang when I go there next month. I am so excited about my trip. 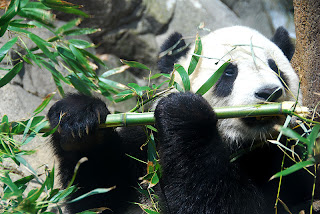 Pandas Live On and Panda News have also picked up on the news reported late last week that Japan is to get a pair of pandas.

A rather thin story appeared in The Sunday Times at the weekend, claiming a link between President Obama’s decision to meet with the Dalai Lama this week and China’s recall of the young panda Tai Shan (above) from the US National Zoo on 4 February. The problem is that the article gives no concrete evidence in support of this speculation and only weak circumstantial evidence.

Tai Shan – born at the National Zoo in 2005 – had been due to go back to China in 2007. That much was written into the legal agreement between China and the National Zoo. As his second birthday approached, the National Zoo negotiated a two-year extension, which ran out in July last year and then a further six-month extension that would take it until early this year. Meanwhile, Barak Obama made a point of avoiding the Dalai Lama until he had met with China’s leaders in November last year. It was during this summit that he is supposed to have politely informed them he would meet with the spiritual leader in due course and not long afterwards, on 4 December 2009, that National Zoo confirmed Tai Shan would be going back some time over the winter. He (and Mei Lan from Zoo Atlanta) arrived in China earlier this month.

The Sunday Times story appears to be based solely on this rather weak coincidence of dates. It does claim that “Chinese authorities have said there are no plans to send any more pandas to America”, which might be worth paying attention to if they bothered to say who these authorities were. From recent conversations I’ve had with panda scientists at the National Zoo, San Diego Zoo and Zoo Atlanta, it sounds as though the panda loan programme in the US (and elsewhere) continues to go from strength to strength.