My publisher Profile Books has just brought out its catalogue for Autumn 2010. You can get the PDF here. 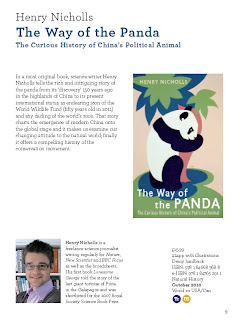 I appear on page 9, along with the super jacket of poster of Su Lin produced in the 1930s after he became the first panda to be brought out of China alive. The title and subtitle, which I canvased opinion on in an earlier blog post, have also been set. The book will be called The Way of the Panda: A Curious History of China’s Political Animal. I had offered a gratis copy of my book to anyone that suggested the subtitle that eventually got used. Unless I’m very much mistaken – and in spite of more than 200 comments to the post and many more title suggestions – the exact configuration of words that I’ve gone with was settled between myself and my editor at Profile. Sorry to disappoint.

My editor also dropped me an email to say that the publishing date has been brought forward to 30 September for “logistical reasons”. I take that as polite code for “get a move on”.