I had a good day last Friday reading and writing about smelly pandas. From the earliest fieldwork on giant pandas during the 1970s and ’80s it was clear that these creatures have a complex system of olfactory communication. The “scent posts” that George Schaller and his Chinese colleagues discovered in the field in the Wolong National Nature Reserve appeared to be like “community bulletin boards” on which individual pandas would post all sorts of different messages, some of them alongside, some overlapping and some completely covering others. 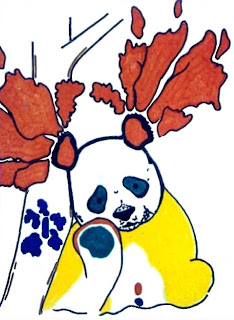 In 2003, chemists identified almost 1000 different compounds in these panda secretions and excretions. Male markings contained much higher levels of short-chain fatty acids than did female markings, reported San Diego-based chemists Lee Hagey and Edith MacDonald in the Journal of Chemical Ecology. More than that, each individual had a pretty unique chemical signature such that given a sample at random, the researchers could, in the majority of cases, identify the individual it had come from. Though they needed a pretty sophisticated analytical tool to do this – gas chromatography-mass spectrometry – pandas have been living with these smells for many millions of years so one imagines have evolved the ability to make sense of them.

In a lovely bit of lateral thinking, Hagey and MacDonald then set about swabbing down a panda’s body to see if the mix of volatile chemicals varied from place to place. The resulting olfactory map is quite remarkable. I emailed Hagey to ask him a few questions about it and he very kindly gave permission for me to post it here (above). Basically, wherever the panda is black – on its four legs, its back, its ears and around its eyes – there is a complex mix of volatile chemicals.

“A panda’s forearms, legs and back don’t carry many smelly messages,” Hagey informed me, denoted by yellow in his map. Their ears, however, are heavily scented with urine, as are the undersides of their forepaws, which presumably act to ferry the stuff from their genitals to their ears (orange). Intriguingly, the black rings around a panda’s eyes, which get rubbed a lot, have a completely unique smell and are completely free of urine (turquoise). This is achieved by the panda being careful to use the back of a paw rather than the urine-scented underside (also turquoise). The dark blue represents the odour from the anal glad, which has been daubed on a nearby tree.

“The body of the giant panda is shown to be a kaleidoscope of scent patches and zones, each with a unique chemical makeup,” Hagey and MacDonald wrote in Giant Pandas: Biology and Conservation. They went on to propose that the urine scented ears act like miniature beacons, allowing these secretive smells to be caught by and spread on the wind.

I love this, though I’m only left wanting to know more. As far as I can tell nobody has yet had a go at manipulating this kaleidoscope to see how it works.