This, I’m guessing, is rather hard. At the Linnean Society of London yesterday, I was one of (as it turned out) seven guest speakers at a day-long symposium about Galapagos. One of the presentations in particular stood out for me – that by Mark Gardener (below) of the Charles Darwin Foundation (CDF) in Galapagos. 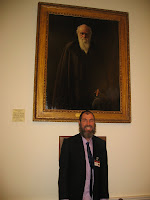 His field of expertise is invasive plants, of which there are now around 700 in Galapagos. In his talk, Gardener laid out some stark figures: between 2001 and 2007, CDF carried out 29 plant eradication projects, covering 23 different invasive species and mostly focused on those still limited to a small area. Only four of these succeeded in their eradication goal and none of them involved areas greater than 1 hectare. His message was basically that eradicating plants is a practical impossibility.

It was not one that went down well with the well-healed London-based audience, or at least that was how I saw it. The dream of transforming these still relatively pristine islands back to a pre-human-like state is one that’s hard to give up. Without this rather straight-forward restoration ideal, it’s much harder to know what conservation means.

Gardener had a few ideas. He talked about “transformers”, those invasive plants that seem able to dominate the landscape and in so doing radically alter the availability of resources, the trophic structure and productivity. Understanding such species would be key.

Instead of removing them though – an impossible task for established transformers like the guava Psidium guajava – Gardener envisages “the maintenance of resilient novel or hybrid ecosystems rather than trying to return systems to their pre-Darwin state.” These novel ecosystems then would be “composed of mixtures of native and exotic elements that would never have occurred naturally” and would “concentrate on ecosystem function instead of iconic species.”

It sounded like a lot of sense to me, but ironically I imagine a compromise like this – which has a fair chance of succeeding – is harder to sell to the public and hence funding agencies than a purist ideal that has no hope in Hades of working.