When in China last month, I succeeded in getting to the Dengchigou Catholic Mission, the official starting point for the giant panda’s historical journey.

I spent about four hours in a car, being driven up into the mountains north of Ya’an City (which is a couple of hours west of Chengdu, which is the capital of Sichuan Province, which is about 2000 km southwest of Beijing, and you all know where that is so I’ll stop). It was my only journey outside a big city, so it would be a mistake to generalise about life in rural China, but I was mesmerised and terrified in equal measures by the sheer industry of the people I passed by that morning.
In the first biggish town we came to – Lushan – it was the industry of individuals I noticed, mainly men busy making, making, making things out of the world around them to make something of their lives. The speciality here seemed to be tree roots. There were workshops open to the street in which men were busy sawing, chiselling and sanding gnarled woody sculptures or varnishing the root system of what had once been a massive tree, presumably to adorn the entrance hall of some plush urban firm. Their sculptures were at once stunning and tragic.

In and around Baoxing, the next main town and the administrative seat of Baoxing County, it was not the industry of individual people that caught my eye. There was plenty of it on show, but it was hard to see amidst the full-scale mining industry that consumes this region. The raw material here is not tree roots but rock. In the industrial zone to the north of the town, factories line the street, with diamond saws spinning raw boulders into perfect table-top slabs. Trucks overloaded with vast hunks of white marble rumble in and out of urban centre (above). 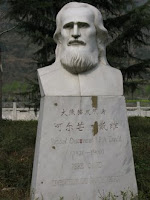 Artisans hone more manageable blocks into dragons, Buddahs and the occasional panda. Road-side boutiques boast shelves of these wares. Passing cars whisk up a film of white dust that coats everything. At what must be a kind of town square, there are several sculptures celebrating the importance of Baoxing County in the panda story. There is Armand David, the Frenchman who “discovered” the first giant panda in 1869 (right). There is Ruth Harkness, the American woman who brought the first live giant panda from this region to the outside world in 1936 (below). In addition, the vast majority (69%) of the pandas gifted to other countries between 1957 and 1980 came from this one county. Beneath these sculptural shrines, the deathly Baoxing River carries its pollution slowly toward the Yangtze. 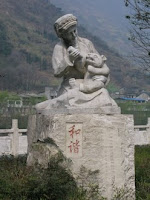 There was not a dull moment on the journey. At one point, north of Baoxing, my driver rounded a hair-raising bend on the road way above the racing Donghe River to find one of the aforementioned marble boulders sitting right across our lane; presumably it had tumbled from one of the aforementioned overloaded trucks on its way down from the mines at Guobayan. (By the way, if anyone has any info about these mines or has visited them, I’d really like to hear from them). We swerved calmly around the lump of bright, white rock and veered carefully back to the precipitous edge as if nothing had happened. On our return journey a couple of hours later, the marble had mysteriously gone, another example of Chinese industry.

Finally, about 30 km north of Baoxing, I spotted the bridge that would take us over the Donghe and into the 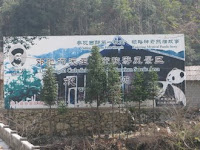 Dengchi Valley. There is a large hoarding advertising Armand David and the Dengchigou Catholic Mission, though it’s now obscured by a couple of conifers (photo). That nobody had thought to cut them down suggests that perhaps Chinese industry does not yet extend to such out-of-the-way cultural relics or the country’s still amazing biodiversity. The successful bid to turn the mountains above this industrious valley into a World Heritage Site includes a proposal to build a museum at this precise spot “to celebrate and interpret the amazing collecting work of Pere Armand David”.

In the next post, I will recount my journey up the Dengchi Valley to the Catholic Mission.