Driving up to the Dengchigou Catholic Mission was a little like driving back in time. As my driver Yong Deng – a very cheerful trilingual Tibetan gentleman with an impossibly soft and husky voice – turned the steering wheel of his 4-by-4 up the Dengchigou Valley, the clock stopped and the hands began to go in reverse. Over the next ten minutes, we travelled back 140 years. 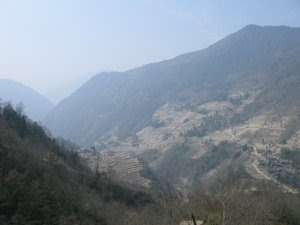 Looking back down the Dengchi Valley to the West.
At the bottom of the valley, where the Dengchi runs into the racing Donghe River, a large dam revealed we were still in the 21st century. The road, though not smoothed with tarmac was nevertheless straight and relatively free of potholes. We sped quickly through a cluster of half a dozen houses with all the hallmarks of late 1990s construction. One of the buildings might have passed for a shop but it was shut. There was no sign of life, save a chicken that sped across the road just ahead of our thundering wheels.

As the pothole quotient began to increase, we slowed to a stop to wait for two men to move a 1970s-style truck. It was loaded with rubble, possibly from a nearby quarry, perhaps to fill in the potholes. As we went higher, the road got worse. A very small, old man walked wearing a cloth cap trudged stoically along the road, a large basket strapped to his back. A straggler from the Long March? The steep south-facing slopes on the northern side of the valley were cascades of scree. 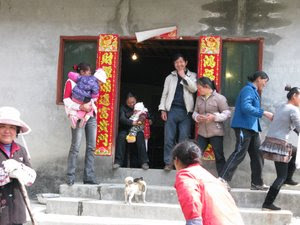 The road, now a track, doglegged back, taking us higher up the north-facing southern slope. We passed another village, in which the entire community had come together to build someone’s house, perhaps that of a newlywed couple. They pointed and laughed. Embracing my role as preposterous tourist paying homage to pandas, I wielded my only weapon, my camera, and the crowd of happy faces quickly fled indoors (above).

Further up, further back in time, a man with a cow-pulled plough came to a standstill to stare. We passed a stand of lush bamboo. I looked back down the slope to see terraced fields. There were more houses, now made from timber, with shrivelled leaves of some sort pinned up like washing. Then, rounding a bend, we came upon the Dengchigou Catholic Mission. 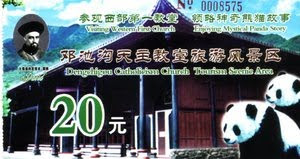 It was locked up and there was not a soul to be seen. Yong Deng, whose voice would not have been heard, opened the car door and leaned unceremoniously on the horn. Eventually a young woman appeared and walked over to where we were standing beneath the Mission’s massive double-door. Above it, a sign read: “To serve the people,” something the woman did very well, handing over two tickets in exchange for 40RMB or £4 (above). 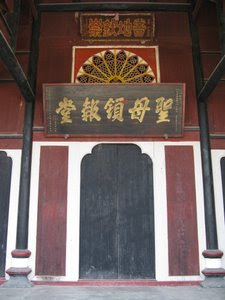 She sorted through a bunch of keys and unlocked the double-doors (above). I expected it to creak and it did not let me down. I stepped over the threshold and into a large and empty courtyard. Bar the absence of Armand David, his fellow Catholic cronies and some cultural relics that had been destroyed during the Cultural Revolution, I felt as though I had stepped back more than 140 years to 1869. For it was then that David lived and worked in the mission and collected four panda skins widely acknowledged to have been the first pandas collected in the name of science.