I have spent the last two weeks combing through the proofs to my book. I delivered the near-final work to Profile Books yesterday.

I have mixed feelings. I have really enjoyed this book and am pretty pleased with it. So it’s sad be drawing a line under it. It is also frustrating to know that there are lots of things that I had to leave out. Just as an example, I had a very interesting interview with Xie Yan, the director of Wildlife Conservation Society at the Institute of Zoology at the Chinese Academy of Sciences in Beijing. Dr Xie’s work is not on pandas but on China’s biodiversity and I wanted to use the interview to pull away from the panda to this more general subject. As it turned out, her voice got squeezed out and did not make the final cut. I had so much to say and was mindful of bringing in too many different characters and asides to the story. 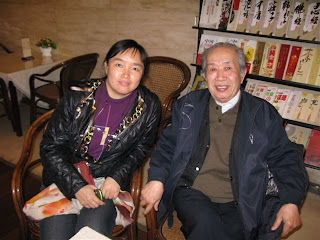 After my interview with Xie Yan in her office back in March, she very kindly came with me across Beijing for an interview she had helped set up with Wang Menghu (above; a retired Ministry of Forestry official who was instrumental in WWF’s negotiations to work on pandas in 1979). Mr Wang had insisted that she come along, so she had to. There are accessible accounts of the 1979/1980 negotiations, notably in zoologist George Schaller’s The Last Panda

, but I wanted to find out what the Chinese felt about these westerners marching in to secure a project on this “national treasure”. It was a completely bizarre interview because Mr Wang was not happy for Dr
Xie to translate his answers to me, but he was happy for me to record his answers and have them translated at a later stage. I thought this was really odd, but later realised it was pretty shrewd. It meant that Mr Wang retained complete control of the conversation, with me powerless to interrupt and direct proceedings. When I got the interview translated back home, it turned out he had not really understood what I wanted from him. Here’s a slightly mocking exerpt:

Even now, I am still a little affronted by the suggestion that I do not know what science is and find it very hard to let it pass without pointing out that I have a PhD in science and that Mr Wang is a retired bureaucrat with no formal scientific training. But that just sounds petty. Mr Wang wanted to talk science because it is not complicated by politics but talking history was a different matter. He said he’d got in trouble a few years back when he’d spoken candidly about historical events. I was not there to set him up. I genuinely wanted to know and tell how the Chinese saw things. But Mr Wang could not know that and could not take the risk. So his is another voice that isn’t in the book.

I also wrote a whole section on efforts to clone pandas but this didn’t make it either. It feels a bit remiss not to mention this in the book, as this kind of nonsense is exactly the sort of thing that pandas have had to put up with over the last 140 years. But then again, cloning pandas is such a silly aside that it just didn’t sit with the rest of what I’d written. Maybe I can write a feature about it in due course.

On which note, I had lunch with my publicist yesterday (darling). We ate across the road from the Profile office in Exmouth Market at an Australian bistro (!) Caravan and talked about me writing features in which I might be able to include some of this very good stuff from the cutting-room floor. She was very enthusiastic about the book and it’s really nice to have someone dedicated to thinking about how best to promote it. I am looking this bit of the book journey very much. I already have my first panda gig. I’ve been invited to talk at the Wigtown Book Festival on publication day – 30 September.

What did not make the cut